Sarah Broady
February 4, 2023

Please be advised: Today is going to be a red-alert day. This means there is a severe risk
for autism to take over more of your child in ways that are going to frustrate you, anger you,
hurt you and threaten every comfort and expectation you desired for yourself and your child today.
This is the warning I wish I could have access to on days that are what I call “Red-Alert” days, or “Severe-Risk Autism Days”﻿. How great would it be to wake up to such a warning so I could better prepare myself for what’s to come. Not that it still wouldn’t be disappointing, but at least I would know and be able to don the appropriate armor to fight the day’s coming battles. Something like what is shown in this picture would be great – except instead of “terrorist”, insert “Autism”. 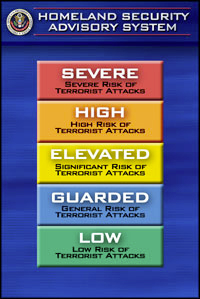