If you have ever seen comedian Eddie Izzard’s show, “Dressed to Kill”, he has this bit about history where he discusses how countries came to be. This is a quote from the transcript. As you read, you have to imagine this guy (yes, it’s a dude in make up and women’s clothing – it’s his comedic “flair”) with a thick British accent: 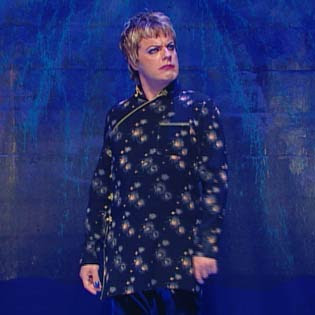 “…So, yeah… and we built up empires – we stole countries! That’s what you do, that’s how you build an empire. We stole countries with the cunning use of flags! Yeah, just sail around the world and stick a flag in.
“I claim India for Britain!”

“We don’t need a bloody flag! It’s our country, you jerks! (not the word he uses)”

“No flag, no country, you can’t have one! That’s the rules that I’ve just made up, and I’m backing it up with this gun that was lent from the National Rifle Association.”

He’s really quite funny, but it’s highly unfortunate that his use of language is very strong. Anyway, back to the topic of this post.

Flags: the latest obsession in the autistic world of my incredibly talented and creative 6 year old, Sam. I wrote a little about this in a recent post, Fascinating Fascinations. He’s been coloring full pages of several different flags from around the world and discussing their location on continents, their culture including colors, origins of flag design and different foods. He had me print out several flags last week and we taped them around his room. Since then though, he has racked up quite a portfolio of his own flag creations and tonight wanted to put them up as well. This is what his room looks like now. By the way, he did not copy anything by tracing – it is all free-hand drawing which is what impresses me most. I know it’s a bit hard to see the design of the individual flags, but he’s very detailed in his drawings. 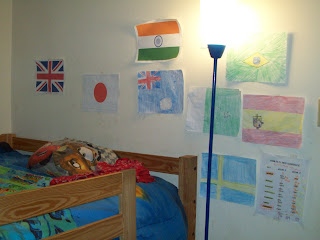 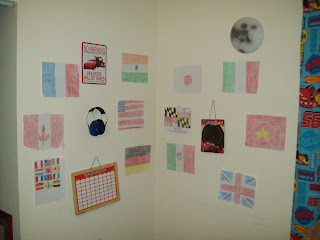 ﻿    Shown on left: Canada, France, India, US, Germany, Japan, Maryland State, Mexico, Italy, China, and the UK. Shown on right: Sweden, Spain, Pakistan, Brazil, Australia, and the printed flags of Japan and the UK.
And of course, the artist himself…
﻿ 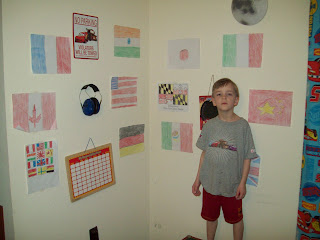 ﻿
﻿He decided after we put them all up that he wants to rearrange them so they are each posted in accordance to their geographical location. North America will be on one wall, Europe on another, etc with all the continents and coordinating countries represented on each wall.
It’s actually kind of a fun obsession to follow along with him, I’ll admit. It’s very educational! I also figured out that’s how I can get him to sit still during a haircut – we talk about countries and their flags. Maybe one of these days he’ll win Jeopardy or some trivia game’s million dollar question by figuring out which obscure country’s flag is being shown. Eh, wishful thinking. For now, he’s at one of his most happiest times when he’s coloring or studying flags. When he’s happy, I’m happy too (well, most of the time – depending on what his brothers are doing!)