The school cafetorium slowly filled with parents and siblings of the children on stage. I walked in to find there were three open seats on the front row and rushed to seat my two boys, myself placed between them. Samuel and Josh talked with me as we waited for the program to begin, smiling and waving at Ben, their big brother, seated in a chair on stage. It was the night of the school’s Spring Showcase, and the Spelling Bee was one of the events. Benjamin had won the spelling bee for his third grade class and was now competing in the school finals which included the top finalists from all the third – fifth grade classes, 17 kids in total.

The principal gave the audience rules of the bee and audience etiquette and expectations – no encouraging or discouraging facial expressions to aid the kids while spelling, be as still and quiet as possible, turn off/mute cell phones, minimize movement, etc. Meanwhile the kids all picked a number to determine seating order and placed themselves appropriately. Sam began to get upset because the principal was talking too long for his comfort and I wondered how he would get through an entire spelling bee. We were there sans Kyle because he was the accompanist for the high school musical, Guys and Dolls and it was opening night. I had the iPad charged and ready to capture every video of Ben so he didn’t have to miss it completely.

The Spelling Bee began and all the parents held their breath until the end. My heart went out to the very first contestant, a sweet girl who missed the first word. As the first round ended, I determined there were at least two kids that I thought would likely end up in the final two. Ben had practiced a lot, and earlier that day we walked around our big circle driveway (me walking, he rode his scooter) as I challenged him with word after word on the “hard” side of the paper spelling list. We had been practicing spelling words as we drove places in the van, during dinner, and at other random times. Round after round, the group dwindled little by little and not terribly surprisingly, my son was still on stage.

5 kids remained. The word “chastise” was given. Kid #1 got it wrong. Kid #2 also got it wrong. Kid #3, just before Ben, was humorously timid as he slowly and questioningly spelled out, “C-H-A-C-T-I-E-S…. Chastise??” The audience laughed. The principal announced it was incorrect and now it was Ben’s turn. If he got it right, the previous three students were out leaving him and the last student in the final two. I nervously held the iPad on my lap, video-ready. I could tell by the look on his face that he knew it. He had just practiced this one with Dad the night before at dinner and we talked about its meaning. Needless to say, he killed it and the previous three students took their places on the floor in front of the audience to finish watching. (They later had to have a face-off to determine a third-place winner, and the funny “Chacties” kid won.)

Rather than tell you a blow by blow of the final round, here is a short clip of the final two going head to head. Ben is the kid in the brown guitar shirt. The other kid is a fourth grader, one grade older. This is a must watch! The video gets a teensy shaky because my 5 year old decided at THAT moment to be squirmy and I had to correct him. Benjamin saw me shaking my head (he had already begun spelling), thought I was giving him a clue he was wrong, and asked to start over. I was so scared I ruined it for him. As you watch, imagine my momma’s heart pounding and my breath held captive until it was over.

Funny sidenote: Ben told me on the way home that he got the word right because it was just like “autism”. As he considered how to spell the word “perfectionism”, he thought of autism and told himself just to swap out the “aut” with the “perfection”. It is also rather ironic that Mr. Perfectionistic won the Spelling Bee with “perfectionism”. It was, as Chandler describes the offer of gum from a supermodel when they were locked in an ATM vestibule during a blackout, perfection. If you never saw Friends, I feel sorry for you.

What thrilled me second-most to my son winning the school Spelling Bee was watching Josh and especially Sam rush the stage afterward and grab their brother in a giant hug, the look of immense pride shining on their faces. Ben won a medal, a $100 gift card to Barnes & Noble, and compliments of the Book Fair volunteer parents, a free book from the fair on our way out the door. 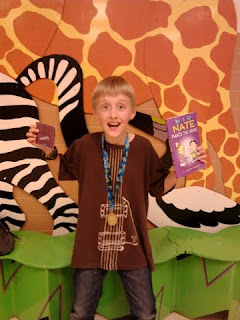 This accomplishment provides so much more than a medal and a substantial gift card to purchase books to his heart’s content. Being the big brother to someone with autism is not easy. Samuel takes up a lot of attention in the family. His brain works differently, and he therefore acts differently. This requires an incredible amount of patience, grace and mercy from every family member. Samuel “gets” to do things that look like a lot of fun – and are fun – but is providing him more than a good time. Gymnastics helps him with his vestibular and proprioceptive senses, balance, concentration, trust, planning and many other things. But boy does it look like so much fun! But Ben and Josh don’t get to do it because we can’t afford it. We had to get a grant just to pay for Sam’s gymnastics. Samuel gets SSI money every month which affords him some recreational items like toys, movies, etc, but also helps to pay for additional therapy and autism summer camp. But Ben and Josh don’t get a special monthly check just for them. Sam has meltdowns and insists on certain things like where people sit at the dinner table, and struggles with so many other things that make family life difficult.

With all of this, it’s not unusual that the other siblings don’t get as much attention. We strive to provide each of our precious three boys special times with Mom and Dad and special treats that no one else gets. Sometimes though, autism gets to be too much for any one of us at any given time. This past week, Ben really struggled with Sam’s autism. He felt like no matter what he did, autism got in the way of their relationship and having fun. Regardless of “the way it is”, he was really frustrated and sad. When the Spelling Bee came, it was something special just for Ben, and he was in the spotlight for once. Not only was it something special he was in, but it became something even more amazing because he WON. An entire room full of people watched his hard work come to fruition as he earned the respect of all those students against whom he competed and especially that of his little brothers. He is a shining star and we can barely contain our happiness, excitement and pride. Way to go, Ben! We love you so much.