Android to the Rescue!

Oh man, I am SO excited! For a while now I’ve been searching for a tablet for Samuel to use for therapy purposes. We went to Best Buy the other night and checked out what they had, and of course they tried to sell us the iPad 2. With the cheapest available including a data plan going for $629, that was an easy no-sell. I have been hoping for something less than $200 – less than $100 would be nice too. But with most tablets in the $300 – $800 range, that was highly unlikely.

It lists the app category, app name, website, about the app and reviews. This was extremely eye-opening to see what’s really available for special needs! I’ve read a lot about how therapists are using iPads and tablets in therapy sessions. We can’t afford the $1600/mo it would cost for regular ABA therapy, but there are lots of apps that allow us as parents to do much of the same thing on a tablet. He can practice speech, writing, eye contact and turn taking, as well as available behavioral charts, reward charts, timers, and lots of parental resources, including diagnosis information and tests and so much more.

The Best Buy guy made it sound like we’d HAVE to buy an iPad in order to get any apps, and should not buy an android tablet because we wouldn’t have as much access. So I did what I do best – research. I looked up I think ever tablet available and found out which ones had access to the Android Market – the place from where these apps listed above are downloaded. There are several free apps, some very cheap apps, and some a bit more pricy, even some with a monthly fee. Even so, with our budget, an iPad is simply not an option. An Android would have to do – and I didn’t care, as long as we had access to the app market to download the special needs apps – the whole purpose in buying this thing!

Black Friday is today, and I knew there HAD to be good deals somewhere on tablets! Google became my best friend as I searched and searched looking for a great deal. I came across a no-name tablet (to me, anyway) called Le Pan. Apparently, it was new back in June ’11, costing nearly $400. Of all the reviews I read from all the other tablets, this one by far outshined all the rest. The negative reviews were rare and seemed to be glitches from the customer end of things. It has WiFi on it, which is helpful for downloading those apps online, a camera, a big 7″ screen (just like the iPad 2’s we played with at Best Buy) and other cool features. The biggest plus of all, of course, came when I saw that it WAS in fact compatible with the Android Market, so all those special needs apps I’d been drooling over would be available at my fingertips – literally! And guess what? Amazon.com had it on Black Friday sale (that started on Thanksgiving) for $197.98 – less than $200! There wasn’t even any tax or shipping either!

This was still a stretch on the budget, but really – $198 versus $1600 a month?! THIS was an easy sell. My husband, concerned about our checking account, was not against the tablet itself, but just being able to afford that much money right now. I logged onto my PayPal account, and had forgotten that I hadn’t yet withdrawn the money I’d made with my coupon match-up jobs through Coupon Divas (see link at top of page) in a couple of weeks. Of the $197 we needed, $143.48 sat waiting for me in my account. Even though I earned it, since I had forgotten about it, it was like found money! VERY exciting.

My husband, sweet man that he is, doesn’t ever want to rush into anything, especially major purchases like this would be. He wanted to sleep on it – it was a Black Friday sale, and it wasn’t even Black Friday yet! When I first found the tablet, it said there were 17 left. By the time I looked at our accounts and we discovered we could afford it right now after all, there were only 7. EEEK! That little tidbit of info pushed Kyle over the edge, and I bought it. I know it’s just a tablet that will be outdated in a couple of months – or sooner, but there was a huge burden lifted from my shoulders and I breathed a deep sigh of relief. Finally – we had some help coming our way! It won’t cure Sam’s autism. It won’t make all our troubles disappear. But I think it will be a great tool to use with our son as we both navigate our world together. And… it doesn’t hurt that we can download the Angry Birds game!

Here is our newest electronic addition: 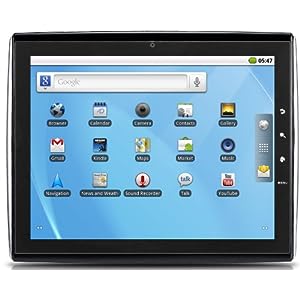