This past week was Samuel’s 7th birthday. Is my Samma-jamma really 7?? Yes, yes he is. He was so happy all day long; he was in birthday bliss. I came out to the kitchen while he was eating breakfast, and before I could even begin to serenade him, he smiled at me and said, “Mom! It’s my birthday today! Sing to me!” I laughed as I sat down and looked in his gleaming eyes and held back tears as I sang “Happy Birthday” to him. I had to sing it twice more before he walked out the door to go to school, and a few more times after he came home including, of course, the “official” time to sing, cake time.

His interest du jour is Ninjago. Quite clever, I think: Ninja Legos = Ninjagos. There’s even a cartoon show about different ninjas. And of course, Ninjago legos. It was a Ninjago birthday, with a few Angry Birds mixed in (plates and napkins). We did a huge full-blown birthday party last year, so we didn’t do one this year. Just our simple family of five with presents and cake. Here are some pictures from his big day.

First, what mom doesn’t want to make birthdays special? I love to bake, and I learned how to decorate cakes from my mom. Thanks to Pinterest, I found some ideas in creating the Ninjago cake. 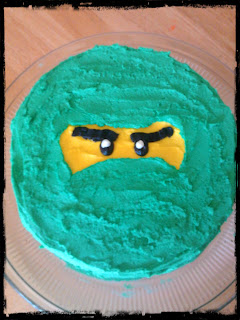 He loved listening to everyone singing to him. This is a pretty big deal because in years past, he has mostly screamed and cried during this song, whether or not it was for him. 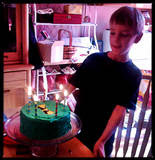 As he went to blow out the candles, he got a little too close and the heat freaked him out a bit 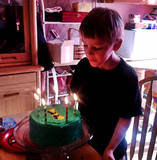 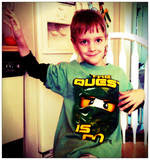 There is a story behind this shirt. He announced only a couple days before his birthday that he wanted a green Ninjago shirt. No pressure, mom. No time to order one online; only prayers that one of the stores would have one. The green ninja is not the most popular one, nor have I really seen Ninjago clothing. I did not have great confidence in finding it in time. I did what any awesome mom would do and went in search of the coveted green ninja shirt. There is a shopping center that has a Walmart, Target and Kohls all at one place. I hit up Target first – there was 1 shirt, but it was Ninjago “generic” and an XL. Next up was Walmart where I had to comb through the racks and found 4, none of which met the requirements for character or fit. Finally, Kohls was my saving grace. Not only did they have Ninjago shirts, they were the only ones that had the green ninja. BUT, the only one available that would fit him had long sleeves. For my sensory-sensitive kid, long sleeves is a big issue. Thankfully, since the shirt looks like a T-shirt over a long sleeve shirt, I just cut off the long-sleeve part so now it looks like a regular T-shirt (thanks to a tip from a friend.) Problem solved! Awesome mom status returned.

Ninjago birthday was a great success. Happy birthday to my sweet Sam!!! I’m so proud of you.