So This is Christmas

The words of the song I heard countless times on the radio continued to echo in my ears yesterday, Christmas day. They sounded empty, hollow and filled with tearful sighs that only autism can bring. This day, this day of a year-long anticipation, this day of glorious celebration, sweetness and joy has been clouded with frustration, exhaustion and grief. This day, of all days, should be the happiest and most joyous day of the year. But it’s not. It wasn’t.

You may ask, shouldn’t I be writing of blessings? Of smiles and laughter and Christmas cheer? Probably. There is some of that – but it’s been overshadowed by autism. That’s why I’m writing. This is my safe place to write about these things. A place where the people who read this know of the struggles we face, and know that my posts will not always reflect the personality of Elf. (“Smiling’s my favorite!”) My life is not all gum drops and marshmallows and rainbows. If it were, I don’t know that you’d much  appreciate reading about it either.
Samuel had several meltdowns on Christmas. He did pretty good opening presents and trying hard to be patient as he waited for his turn, and he didn’t cry when the last gift had been opened. He did get upset that he got a Lego Ninjago backpack (of his favorite character) instead of a Star Wars backpack – even though he specifically asked for THAT NInjago backpack. He argued when we tried to tell him that’s what he asked for. Both he and his little brother decided to change their minds on what they wanted and said they asked for – on Christmas morning. Joshua, 5, threw a huge temper tantrum when he opened a very large, expensive Lego Ninjago set from his grandparents who are visiting with us for the week because, “I don’t like Ninjago anymore!” *Face palm* 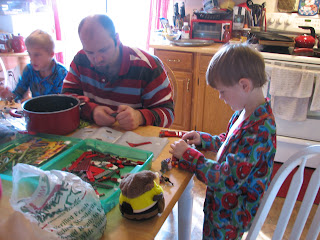 As the day wore on, Joshua recovered from his tantrum and both boys decided they did like their gifts afterall. Lego building with grandparents commenced. Sam was having trouble with his Legos which meant he was crying and screaming a lot. So he went to use his new Angry Bird ballpoint pen to draw, and the pen wasn’t working well. He didn’t want to play with the Angry Bird Star Wars plushies he got because they were “only stuffed animals.” He didn’t want to have Christmas “dinner” at 4, because we’re supposed to have dinner at night (when it’s dark outside.) He had a huge meltdown and I ended up having to carry him to our room. As I carried him, he straightened out his entire body like a board as he screamed in my ear. When I put him down on the bed, he started hitting himself in the head. I did my best to block him from hurting himself and he yelled at me for doing so. I tried to have Fred sit with him to calm him down, but he just yelled that he didn’t understand why Fred was there and screamed at me when I explained he could pet Fred to help calm him down. The screaming sent Fred out of the room, which was probably just as well.
He began to relay to me his woes – all of the aforementioned frustrations – and he cried out, “This is the WORST Christmas EVER! I’m having a BAD Christmas day. I’m so MAD! I’m FURIOUS!” I just sat with him, told him I understood why he was so upset and tried telling him about my own cooking woes (my cocoa crepes were NOT turning out!) and that not everything always goes the way we want it to. He calmed down after some time of us just laying on the bed together a while and then went to rejoin the Lego team in the kitchen. Kyle walked in the room as he walked out, and all the tears I had been holding back as I sat with Samuel came flooding out. I was just so tired. This was not the way Christmas should be.
But, of all days, this day held something that no meltdown could destroy that I clung to for dear life. If anything, the failures of the day only made that something grow bigger, stronger, and more real and solid. Woven through each tear, each fallen Lego, each disappointing crepe and each word of frustration is the one thing that was given on this day for me to hold onto: HOPE. Jesus Christ was born on this day. Heaven came to earth. Hope was born for the hearts of the weary, for those grieving with tears, for those whose words utter no sound. Yes, hopehas come.
The birth of our Lord ushered in something new, something different and unexpected. He was what everyone had long anticipated and desired. But He was at the same time something completely unlike their expectations. A king was born – not just another king through royal blood, but THE King of all creation: God incarnate. And His kingdom would not merely be an earthly kingdom; no, it would be something altogether surprising and beautiful, a kingdom of heavenly eternity if our eyes of faith would only believe.
Christmas, the day of the birth of our Lord and Savior Jesus Christ, is a sweet day of hope. Perhaps it isn’t a day of complete and utter joy, or one of sweet contentment, or of confection perfection, as it certainly was not for me. But it is still a day to be celebrated, even the day after and all the rest of the year. It is a day of hope.So please, think of your Christmas this year and think of the King who was born who will make all things new and beautiful. Lift your eyes to heaven and join me in awe and wonder as I repeat once more, “So this is Christmas.”