I wrote this post weeks ago, but could not get pictures loaded! Finally found a way to do it. 🙂

Have you ever had a perfect day, maybe even just a perfect moment that you purpose to remember during all the other days and moments that aren’t so perfect? I have a few of those. Mostly fleeting moments, (rarely captured with a picture), and so far just one whole day of perfection saved in a special folder in my memory on reserve for days like today… and yesterday, and maybe tomorrow too.

Reading through recent posts, I thought it was time for a more happy uplifting post. I know I often write about the “reality” of autism and our life raising Samuel. I don’t want to sugarcoat our life – it’s not real or genuine. But when I write of the angst and grief I feel, that is real. That’s our life. Typically, I tend to feel the need to write when things are not going very swimmingly and noing well. When things are smooth, life feels normal. Since this blog was born out of all that is not normal, I don’t remember write about the good parts. Instead of blogging about it, I’m relishing it.

Luckily, that’s not what this post is about; however, it is precisely because of the “autism experience” I had today that I write about the “perfect times of remembrance.”

To start, my husband gave both Ben and Sam money to spend at the Holiday Shop at school where they could buy and wrap gifts for whomever. Christmas morning, Sam picked up a small decorative bag and brought it to me. He was playing with a toy, but he watched me open it. I pulled out a 1″ square plastic box and opened it to find a gold ring with a heart shape on top and a pink jewel in the middle of the heart. Smiling, I looked at him with tears in my eyes and asked, “You bought this for me?” I will never forget the look on his face and wish I had a camera to capture it. He was smiling – really smiling with brilliant happiness and the sparkle in his eye rivaled that of my own engagement diamond ring. For a moment, I had my son. I hugged him even though he only let it last a second and immediately put it on. Every time I look at it, I remember that smile and the sparkle in his eyes.

Another is just a picture. Several weeks ago, it finally snowed here in Maryland. It’s been an incredibly mild winter, surprisingly but thankfully so. Anyway, the boys were home (I don’t remember if it was weekday and they were home for a holiday or professional day or maybe it was a Saturday) and it began to snow. At first, it was just a flurry, but it quickly turned to a good, solid fat-flaked snow. Sam and Josh were thrilled and couldn’t get their coats and gloves on fast enough. They flew out the door and I followed with camera in hand to capture the sweet moments of magic. Here is the picture I took: 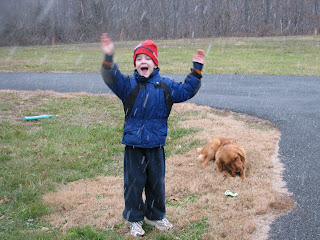 This picture represents something very precious to me. If pictures are worth a thousand words, I would let this picture repeat the same word over 1000 times, HOPE. What’s so unique about this picture? It’s just a million other pictures other families have in frames or on their memory cards, probably more of the same kind of picture than they care to keep. Exactly. That’s what is special about this picture. Everyone else has one (or so it seems), and I DON’T. At least, I didn’t until this day. This picture is especially poignant because it also represents all the challenges he has overcome in the last several years. First of all, notice his clothing. He’s wearing a coat. And a hat. And you can see his long sleeves sticking out of the edge of his coat at his wrists. Furthermore, he’s wearing sweatpants. And shoes. And under the shoes, he has on socks. It used to take a VERY long time to try to dress this boy for cold weather because of his severe sensitivity to anything touching his skin. Just last year, he refused to ever wear a coat, insisting he was not cold. He also refused to wear long sleeves, much less a coat. Even if I put him in a long-sleeve shirt, he would push the sleeves up because he couldn’t stand the feel of long sleeves. Every change in season wrought anxiety in him as he was forced to wear appropriate seasonal clothing for his own safety and health.

Second, look at his posture. His arms are thrown up in the air in utter glee. He’s happy. His ungloved hands are being snowed on, yet there remains a smile on his face. Because of his sensitivities, he also could not bear the feeling of water or anything wet on his skin anywhere, especially his face. But here – look at him! He’s not just enduring the snow. He is not tense with his arms clutching his chest or covering his cheeks as he used to do, his face contorted in pain. He is a free bird, soaring on the joys of the first snow, delighting in the wet snowflakes gracing his sweet button nose with his arms outstretched in the most purest of all childhood pleasures. He is a willing spirit partaking in the magic around him. Another moment of this day that I failed to photograph since I was driving away as I saw it was that more than allowing snow on his face, he stood with his younger brother and they both had their heads tilted back as they stuck out their tongues to catch a taste of the enchanting snow. This from the boy who only eats 4-5 specific foods, essentially eating the exact same meal at every mealtime. He’s been in a feeding clinic where we had to go through a series of at least 5 (there are up to 60) different steps to get food and/or drink down his throat and there was no shortage of crying and screaming as we worked with him.
This day, he willingly put on long sleeves, a coat on top of the long sleeves, a hat on top of his head, shoes AND socks. He willingly ran out the door and without any prompting from me, he did what most other neurotypical kids do without having to fight against what every fiber in their sensitive body are telling them. He played in the snow. 5 years ago, this was only a dream.

Finally, the perfect day itself. It came within a week of the previous moment in the snow, but instead of one fleeting moment, it was an entire day – from waking up to bedtime. The whole day was completely void of any and all disruptions of any kind. There were no meltdowns. There was no crying. There were no arguments. There was no sensitivity to anything we did for either food or clothing. There were no behavioral oddities. It was truly, a PERFECT day. Even the snow was perfect! 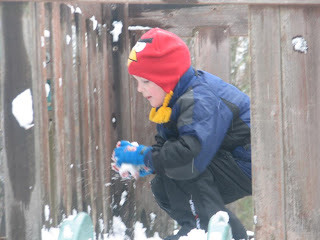 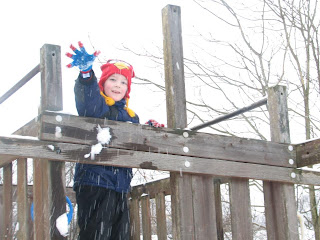 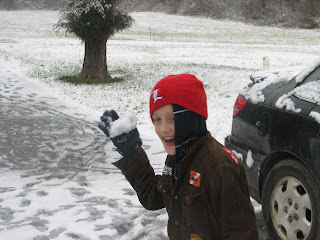 Once again, it was snowing, only this time it stuck. It was wet snow, the perfect kind for packing tight snowballs. The whole family got dressed and spent a good chunk of time outside running around with the dog, grabbing snow and packing it just in time to launch it at oncoming famiy members. Sam would run up to any of us and say, “You can’t catch me!”, actually wanting us to throw snowballs at him. He would run away, and I would softly pelt his back somewhat expecting him to change his mind about how he felt about it and cry. But he never did. He laughed! All of us were laughing – hard. The boys took shelter in the upper deck of the playset. You can see Sam preparing his ammunition and throwing it at unsuspecting brothers below. Notice the smile on his face. After a morning in the snow, we all had hot chocolate with a few rounds of marshmallows. We all lounged together, watching movies, napping and just playing and eating together. 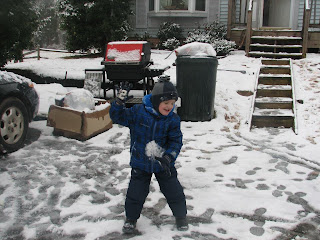 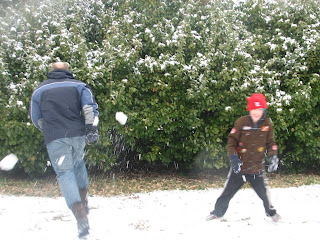 It was probably more perfect than any of the “perfect” days I often suspect everyone else has. Typical families might read this and think to themselves, “We never have days like this!” Maybe you don’t. But for a mom who rarely gets to experience the regular joys of having all typical kids, this was a much needed day of rest and hope – and joy. Because the following day wasn’t so great. Or the days after that. Or today. That’s why I believe God graced us with that day (I wish I remember the date! I think I can look it up on FB, haha!) He knows we need a day like that to look back on and remember, knowing that the possibility of another day just like it is now more tangible than ever. One day provides the hope for a thousand more days just like it (or close to it.) That’s all the hope I need.