Turning the Expected On Its Smiling Head

It’s been several weeks since my last post. But there’s been a LOT going on! My husband and I went to Kenya on a mission trip for two weeks and when we got back, school was let out for summer two days later. We’ve been adjusting to our new routineless routine for summer and planning our summer events and vacations, so please, give me a break!

As I anticipated, summertime is hard for us. People have asked just as we do, “are you looking forward to summer?” My answer – a resounding “No!” Transitions are hard for Samuel, and consequently cause difficulty and frustration for the whole family. While he’s had his many moments over the last week, he’s also shown surprising progress. There are a thousand things I hate about autism, but if I had to name one thing I loved about it (other than it makes my son who he is, and I love him unconditionally in spite of and even because of it), it’s the surprisingly pleasant and especially joyous twists that turn preconceived expectations on their head in celebration of the unexpected. And celebrate we must!

I’ve been impressed with Samuel lately for playing with his brother. His little brother. It’s not such a big deal that he’s playing with someone, but the fact that he has willingly chosen to play with Joshua, whom he constantly complains about because he’s young, or because Josh looks at him – or heaven forbid smiles at him – this is huge. Not only does he willingly play with Josh, but he is sharing his toys (mostly), planning out the play schemes of the motorized Cars on their shared GeoTrax together, and – wait for it…. laughing! He smiles and calls to me with Josh to show me their planned crashes with carefully stacked cars across the cars tracks. All of these things are great things – it’s progress to play with someone else. To even consider sharing without a meltdown. To allow someone – especially Josh – the privilege to share in exchanged glances. To smile when he refuses to smile any other time because he “hates smiling.” To laugh during times of joint attention. To show me his work. To compromise in play.

Play… that is a difficult area for a kid with autism. Not so much playing alone – they’ve got covered. But playing with others – that is hard to do! You never know what crazy idea your 6 year old friend might come up with, and then will expect you to go along with. What if they touch your toys? What if they touch you?! People are unpredictable, and it’s much safer to stay in comfort of your own world.

Enter the world of organized sports. Every summer, our church offers a free soccer camp to the community. For the past two summers, Samuel has been able to participate with Benjamin, his older brother. He always looks forward to it, speaking very highly of it, but then can’t seem to make it past the first 15 minutes without whining, “When is it over?” They usually haven’t even started to play yet – the first 15 minutes are gathering together stretching, then singing a couple songs as my husband plays the guitar, then a short Bible story before breaking up into older/younger groups for drills. Oh, and it’s summertime, so it’s hot. And there are bugs. We do use bug spray, but not without having to chase him with it or hold him still just to get a few squirts on his arms and legs – all while he’s screaming that it’s hurting him and then crying that it’s wet. 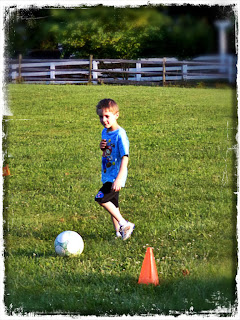 Tonight was the first night of the 4 day soccer camp. Due to impending thunderstorms last night, the first night was cancelled, so there are only 3 days this year, but that doesn’t really matter. During stretches, I stood off to the side with a girlfriend searching the circle of kids and couldn’t see Sam. Thinking he might be off scripting to himself, I was surprised to see him in the circle – hidden by one of the teenage helpers. Usually he just stands there, but he had his arms outstretched and was following the stretching directions. Fred tagged along with us, so he sat with Sam during song and story time. When it was time to break up into groups, I did not hear any crying about being separated from Benjamin, his older brother to whom he would probably prefer to be surgically attached. He followed the directions to stand in line and prepare to kick the ball in and around the cones from one end to the other and back again. He was first in line, and though he needed a bit of help from one of the coaches, he did the drill – the whole drill! SEVERAL TIMES!!!   I stood by with Fred and each time he came back and completed the drill, Fred gave him some encouragement. He got to love on Fred a bit as a reward, then got back in line to wait for his next turn. He participated in the entire drill set and then he continued by playing a drill game with everyone that looked chaotic (only because we only saw a mess of kids and soccer balls not knowing what they were doing) and occasionally saw him and other kids doing jumping jacks yelling, “I’m a star!” repeatedly. Part of the game somehow. At a couple points, he did need a break for water and to pet Fred and only whined once asking when was it going to be over. But he kept going. He persevered all the way to the end. I watched him get upset as twice he lost in the game because other kids got his ball, but then I also saw him bounce back.

For the first time, I didn’t feel like a special needs parent waiting for her special needs son to lose it. Well, I guess I was waiting, but it never happened. But because it never happened, I was able to feel like a “normal” parent cheering on the sidelines. We went back and forth to cheer on both Benjamin and Samuel, but I have to admit there was greater pride in cheering on Samuel because I know what it took for him to do it and to stick with it the whole time. He didn’t accept our praises very well because he thinks he failed, but we are doing our best to show him that it doesn’t matter if he won or lost, but that we are so proud of him for playing – and a couple of times, really playing well!

Today was so encouraging to us. Things might be completely opposite tomorrow with Joshua, or for the rest of the camp this week, but we were privileged to witness the joy of the unexpected, and that is what we celebrate, and the hope we hold onto knowing these kinds of twists are possible at any given time. We celebrated at McDonald’s with McFlurries – what better way?