For the last two weeks, our family has been away from home in Indiana spending time with my husband’s family. Kyle had a youth camp, M-Fuge, to attend just a few hours away, so we went up to his family’s house a week before camp, and while he was at camp, I stayed with the kids and Fred, our dog. It was a great trip and we did lots of fun stuff. I took the kids to a playdate with another mom and her girls, we saw Ice Age 4 Continental Drift in 3D (at the request of Sam!), went to our aunt’s house who lives on a lake and did some swimming, went to Chuck E. Cheese with another group of moms and kids, built Legos and played Ninjas, and just hung out at home playing Wii and coloring LOTS of Cars pictures.

I’m a bit nervous right now because the last two weeks that we’ve been gone, Sam has been doing GREAT! He’s certainly had his moments, and he still scripts quite a bit, still very restricted in his (and his brother’s) play, but I was so very proud of how he did with everything while we were gone. I say that I’m nervous because what we have found to be true with Sam is that in the midst of change, he handles it quite well. It’s after the change is over – like after we come home from 2 weeks at someone else’s house – that the behavior really escalates.

Yesterday morning as I was getting the van packed up, he was coloring his Cars pages that were taken out of a large coloring book he and his brothers all used. He had collected 16 pages, and was so proud of his work. (He really is a very good colorer – always has been!) He was walking around proudly telling us all that these were his 16 pages. Then the 16 pages were gone. He had put them down somewhere and could NOT find them anywhere! Neither could anyone else. He was very anxious, crying as he squeaked at me, “We’re not going to leave Indiana without my PAGES, are we?!?!!” I said no, praying I wasn’t lying. Thankfully, we found the pages. Pillows and blankets had been put on the counter on top of the pages, so as I picked them up to pack, I found his beloved pages. With that, he was calm again. But the day had only begun.

He did okay in the van. Traveling with kids is just not easy, and I don’t know of any family – autism or not – that doesn’t deal with bickering siblings as they shout threats from the driver’s seat. My drive was no different. Other than typical aggravations, the drive went pretty smooth. Thank goodness for a built-in DVD player!! 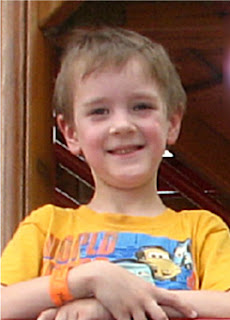 Now we’re home. Prior to our trip, ever since school let out, Sam has been one big ball of autism nerves. Tons of meltdowns. Random days of progression followed by more meltdowns and difficulties coupled with me being crippled under the pressure. On the trip, Sam decided he wanted to smile. This has been an issue with him for a very long time. He despised smiling, or anyone smiling at him. Suddenly, he was posing for pictures, smiling sweetly, sometimes even allowing Joshua (his younger brother) to look at him and smile which used to always scream at him for doing. He seemed happy in general, and I couldn’t get enough of it as I took advantage of every photo-op possible. It was as if one of the myriad thin autism layers was peeled back to display my son as I always knew he really is. What a victory!

But now I wait. Waiting with baited breath as I anticipate the meltdowns that, if the past has taught me anything at all, are very sure to come – soon. Tomorrow, our church starts our VBS program. It will be another avenue of change and transition for 5 days. So maybe this week will continue the progress we saw in IN and stave off the potential behavior problems. Time will tell. I hope to be writing a good report over the next few days and by the end of VBS.